World No Tobacco Day: How smoking can play havoc with your pet’s health – Hindustan Times 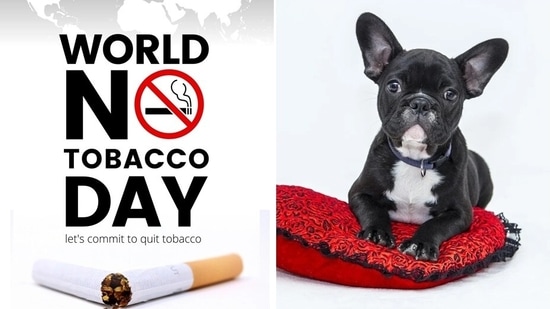 We all know how smoking not only leads to disastrous health consequences for the smoker but also for their family – kids, spouse and other family members. But did you know how it can impact your lovable pets? On the occasion of World No-Tobacco Day, which is observed worldwide on May 31 to remind everyone of the dangerous effects of tobacco, we spoke to an expert about its impact on pets. (Also read: World No Tobacco Day: 4 ways chewing tobacco or smoking can affect your oral health)

In the case of dogs, smoke compounds are usually trapped in their nose due to the presence of mucus and other defenses. Based on the size of their nose, tobacco can lead to nasal (longer noses) or lung cancers (shorter noses). Cats are even more susceptible to the harmful effects of smoking. It is because of a simple natural habit – Grooming. They groom themselves multiple times a day. This means that they are ingesting all those smoke particles that have settled on their fur. Because of this, cats may develop oral cancer and cancer of the immune system.

Dr. Dilip Sonune, Director of Veterinary Services at Wiggles.in says that passive smoking is dangerous for pets and can cause serious respiratory issues.

“Many pet parents smoke but don’t realize how harmful it is for pets. It can cause lung cancer, nasal cavity cancer and breathing problems. It’s common knowledge that pets groom themselves and can ingest poisonous material and toxins. I lost one of my patients, an 11-year-old lab to lung cancer, last year. His parent used to smoke around him and over a period of time the pet developed respiratory issues and eventually fatal cancer,” he said.

Dr. Dilip added that the best way to protect your pets is to quit smoking and use of electric nicotine devices around them. “Avoid tobacco consumption in your home or car even if your pet is not present, because the toxins settle everywhere like upholstery, carpets and even fabric.” he said.