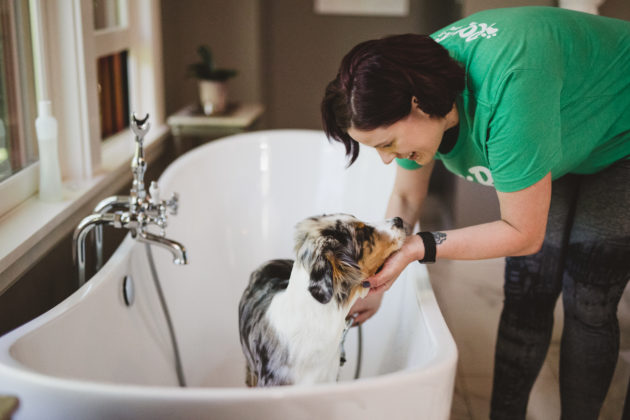 Dog-grooming services are getting clipped from Rover’s marketplace, at least for now.

Citing the challenges of the labor market, the Seattle-based company confirmed Monday that it will no longer offer in-home grooming in the 14 cities where the service had expanded since its debut more than two years ago.

GeekWire learned of the decision this weekend from a Rover customer in Seattle who tried unsuccessfully to book a grooming appointment. The company issued this statement in response to our inquiry:

“Through the grooming option offered on our platform in 14 cities, thousands of pet parents arranged high-quality grooms for their pets. We heard from many pet parents that they valued the opportunity to have their pets groomed by experienced providers in the comfort of their own homes.

“Dog grooming is technical and requires a specific set of skills, and there is currently a labor shortage in this specific industry. Given the realities of that aspect of the labor market, we do not believe now is the right time to scale up this offering. We’ll continue to investigate ways to address the grooming market opportunity in the future.”

Rover said it doesn’t expect any layoffs associated with the decision.

The Seattle-based company’s marketplace connects pet owners with service providers who can board, walk, or otherwise care for their pets, often when they’re at the office or on a trip.

Rover launched dog-grooming services in June 2019, after nine months of testing, starting in Seattle and Austin, Texas. The idea was to leverage Rover’s existing infrastructure to disrupt the $2.5 billion pet grooming industry, using online scheduling and other features of its marketplace.

But the service didn’t prove financially viable for the company.

Rover CEO Aaron Easterly foreshadowed the move in response to a question on the company’s Nov. 8 earnings call. He indicated that Rover had seen strong interest in grooming but not the return it wanted.

“With grooming, we’ve been very excited about the opportunity to solve some pet-parent pain points. And the feedback on the demand side of that offering has been very positive,” Easterly said at the time.

He added, “That being said, we’re not excited about the possibility of scaling the business overall and the profitability attached to that. So we expect to be looking at alternatives to solving those customer pain points in the future.”

The decision contrasts with overall growth in Rover’s business.

The company’s revenue rose to $35 million in the third quarter, ended Sept. 30, up 31% from the same quarter two years ago, prior to the pandemic. Quarterly gross bookings rose 35% to $157.1 million over the same two-year period.

Rover is also expanding its business in other areas, putting greater focus on cat services such as boarding and drop-in sitters. Cat-related bookings rose 79% in the third quarter, vs. two years ago.

The company, hatched a decade ago at a Startup Weekend event in Seattle, went public in August through a merger with Nebula Caravel Acquisition Corp, a publicly-traded special purpose acquisition company (SPAC) sponsored by True Wind Capital. Rover raised $240 million in the SPAC deal.

Rover posted a net loss of $84.5 million in the third quarter, which it attributed largely to non-cash accounting adjustments related to that SPAC transaction.

Without those expenses, Rover posted an operating profit of $710,000 and adjusted EBITDA (earnings before interest, taxes, depreciation and amortization) of $6.6 million, its second consecutive quarter of profitability by that measure.