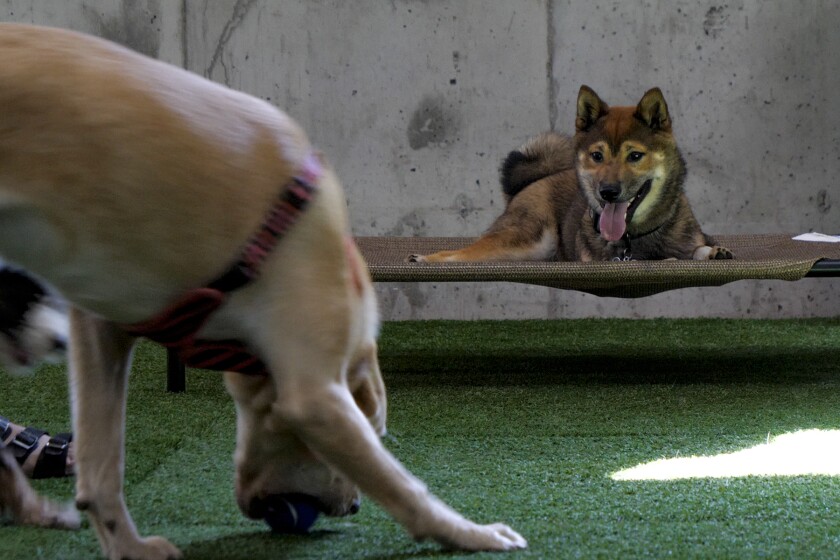 After less than two years, Rainy Days outgrew its previous location, Simbe said. Anyone who tried parking there would have experienced that rapid growth firsthand, she noted. “Some of our neighbors weren’t able to park their cars because of all the dog people,” Simbe remarked.

More two- and four-legged patrons meant Rainy Days needed to expand its services as well. In addition to the dog park, Rainy Days now offers a year-round indoor dog pool, grooming, daycare and boarding. Simbe also plans to add in a walk-in pet clinic as well. “We are a one-stop shop,” Simbe said. “We try to have all the dog services under one roof.”

The new location comes in at slightly under 9,000-square-feet. That’s a marked upgrade from the 5,000-square-foot play area Rainy Days had at its previous location.

Rainy Days offers a variety of memberships which range from $35 per month to $65 per month. Ten one-day passes are also available for $80. Single one-day passes can be purchased at the door for either $10 or $15.

The park is open from 10 a.m. to 9 p.m. on weekdays and 8 a.m. to 6 p.m. on weekends. Those with an upgraded membership receive a key fob that allows them 24-hour access to the park, which is sectioned off from the offices, grooming and boarding areas.

Round-the-clock access is beneficial for night owls of all kinds, Simbe said. “That really appeals to nurses or construction people or people who work overnight,” she commented. “Dogs are unpredictable. They’ll run wild at 2 a.m.”

Simbe opened Rainy Days in 2020 because her dog Reign loved to go outside despite the weather. After surveying other dog owners, she realized Reign wasn’t the only one itching to get outside in the summer heat and winter chill.

Since its founding, Rainy Days visitors have been particularly happy to have a place to stretch their legs in the winter. “People were grateful to have an indoor dog park for their furry friends to escape and socialize and hang out,” Simbe said.

A year-and-a-half and a new location later, Simbe took pride in seeing Rainy Days continue to expand. She was also happy that driving around the building would be a lot easier now, too. “Luckily we do get the whole parking lot,” she said with a laugh.