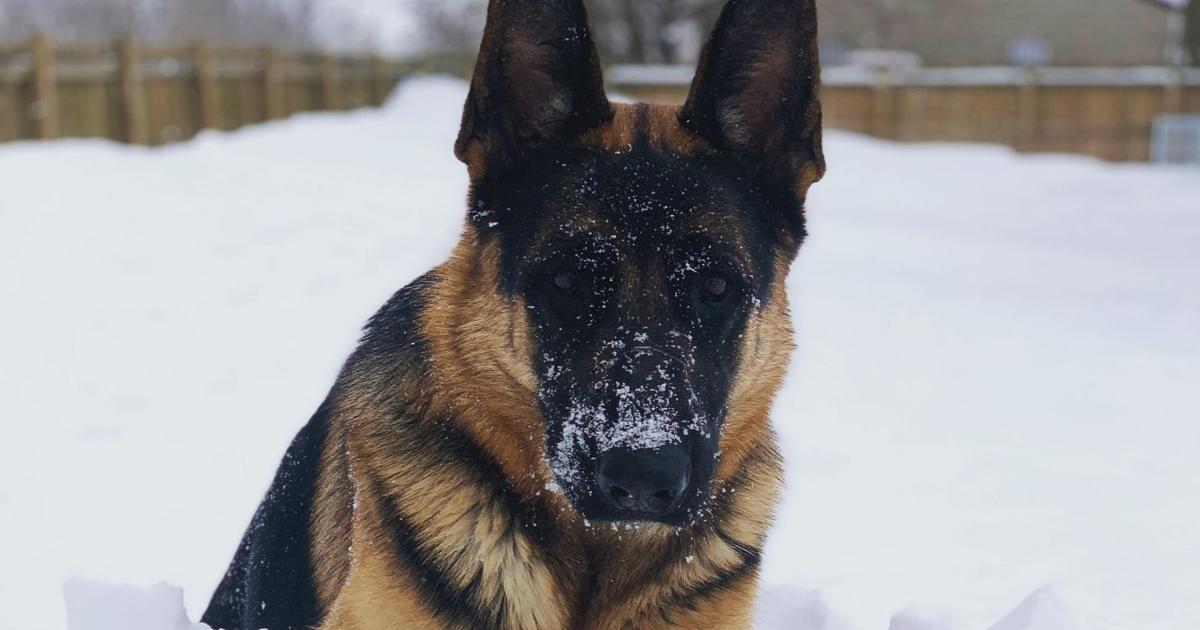 Residents and staff in Westview Care Center in Britt were recently treated to law and drug enforcement demonstrations by Forest City Police Officer Tyler Harmon and K9 Officer Kovu, his canine partner since 2018 and family pet/companion in his “off-duty” hours.

Harmon is originally from Woodland City, but the K9 policing duo has a history in Britt, where Harmon first became a K9-handling officer. Partner Kovu will soon be five years old in May. Before the pair transitioned from the Britt to Forest City Police Department on Jan. 11, 2021, the Forest City Council waived a police residency requirement to allow them to maintain residency in Britt. Harmon’s wife, Hannah, has run a home business (Pretty Paws) to provide dog grooming and boarding. They have two children Kingsley, 5, and McCoy, who will be four years old in February.

At Westview, which is owned and operated by ABCM Corporation from 445 8th Avenue SW in Britt, Officer Harmon demonstrated how Kovu does his job. That included sniffing for and alerting Harmon of the presence of drugs. Harmon had boxes placed around the room where residents and staff gathered, but drug paraphernalia underneath only one of them. Kovu smelled and alerted Harmon to which box had drugs underneath it by sitting when he found the drugs. Nursing home staff said everyone was impressed at how professional and successful Kovu was in his job duties.

Harmon also informed residents and staff about the background that is required to be a K9 official, the different dog breeds that are normally utilized, including the most common Belgian Malinois, as well as the level of training that they must have. Kovu received his canine handler coaching from Hancock County Deputy and Master K9 Trainer Andy Klein of Tree Town Kennels, LLC within Forest City.

Harmon elaborated on regular training that he and Kovu go through weekly to keep Kovu’s skills honed. Many residents said that they loved learning all about him. Westview Care Center offers long-term care, Alzheimer’s care, and therapy services.

When the policing duo transitioned to the Forest City Police Department in January 2021, everybody in Britt and Woodland City wanted to see Kovu stay with his best friend plus police officer partner. In fact , the Britt City Council went so far as to approve an agreement to sell its police K-9 vehicle, canine and related K-9 equipment to the Forest City Police Department at the time. Britt Council members and Britt Mayor Ryan Arndorfer cited the importance of Harmon’s working relationship with Kovu in keeping them together.

Harmon is a 2011 Forest City High School graduate, who worked as a Forest City reserve police officer from 2011 into 2014 before completing police academy training in Dec. 2014 and then starting full-time for the Britt Police Department. He credits the Britt Police Division for making his dream of becoming a K9 officer possible.

In addition to narcotics detection, K9s are often used to locate missing persons plus fleeing criminals, to protect their handler and other officers, and benefit numerous public relations programs by visiting schools and community groups.

Be the first to know