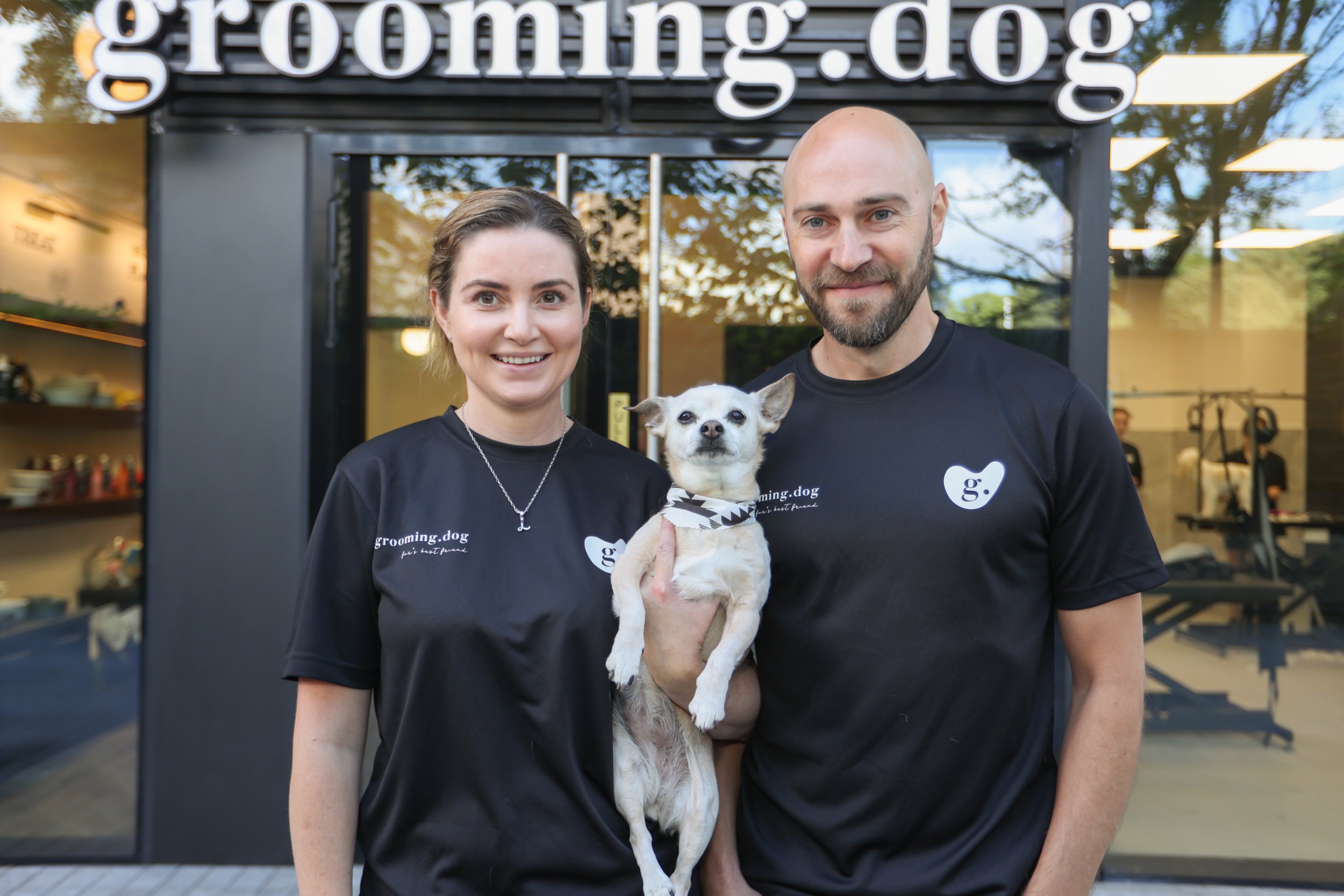 HUNDREDS of pooches are enjoying five-star grooming for up to €150 a pop at a doggie day spa as Ireland joins the animal care revolution.

But the couple behind this pet business are already threatening to sell up after just a few months in Dublin, insisting they are being put on a leash by tax issues.

Paul and Laura Abbott with their dog Riley at their parlourCredit: Gary Ashe – The Irish Sun

Paul and Laura Abbott ran award-winning pet hotels in the USA, and returned to Ireland in 2020 with their two children to start their pet project at home.

But Paul, 39, says it’s time to start treating animals the same as humans when it comes to the country’s crippling higher VAT rate.

He explained: “The business environment in Ireland, for a bricks and mortar start-up like ours, is borderline impossible.

“There’s no logical reason why we should be on a VAT rate of 23 per cent. In the US, there is no tax on pet care. This is sensible as pet care is an essential service, as demonstrated by dog groomers being allowed to remain open ­during the Covid lockdowns.”

He added: “We know what we can do in the States.

“We built two very successful companies from scratch. Whereas here in Ireland, it’s just problem after problem that doesn’t need to be there.

“As things stand, there is a very real possibility that we will be moving back to the States.”

The Abbotts had a whole host of celebrities’ pets under their care during their time in Washington DC — but decided to sell up and return home after a decade away.

Most read in Money

The prices depend on a dog’s “breed, temperament, size, coat, and product options” as the desired style — with the average cost of a full groom coming in at around €85, and maxing out at €150.

Paul admitted the service is “expensive” but said people are willing to spend money to keep their pets happy and healthy.

He said: “We are an expensive shop and you get what you pay for. What we find with animals, most particularly with dogs, is that people are willing to spend.

“Dogs are part of the family so people will pay to keep them happy and healthy — and grooming is very much a big part of that.

“After opening we turned a profit in month four, and business is growing every day. We have over 850 clients and over 150 five-star reviews on Google.”

The couple’s business in Washington DC, called The Life of Riley, was just two miles from the White House.

It had a wide range of A-list celebrity clients, from news anchors to baseball players, and NFL players to movie stars. And their Irish iteration has also attracted some star-studded customers, with Hollywood actor Joe Manganiello among the happy customers after a recent visit with his four-legged friend.

But despite the positive start, Wicklow native Paul said the business environment in Ireland is a lot tougher than in the States.

He said the firm is being held back by a “crippling 23 per cent VAT rate” compared to the reduced rates hairdressing salons face. In Ireland, the general rule for VAT is a reduced rate of 13.5 per cent for service-based businesses.

“Dog grooming is very much a service, which is deemed to be essential by the Irish Government. Yet they force us to charge 23 per cent VAT while hairdressers operate on a reduced rate of nine per cent.

“We have two young kids and we only got them back in the country to start school two years ago. And the last thing we want to do is uproot our kids again.

“But we have to be able to make a living and Ireland is clipping our wings to an extent that is not sustainable. The downside here is the lack of opportunity to expand. If the VAT issue could be addressed then I really could see a serious expansion opportunity, with a few little shops all around, in areas like Greystones, Malahide and even further afield.

“But as it stands you are just going to have a lot of operations just being run from people’s garden shed or from a room in their house.

“If we could address the VAT issue I think other people would be interested in growing the dog grooming industry into a properly functioning business.”

The couple had plans to open a doggie daycare next door to the spa, but they have been brought to heel due to spiralling costs and Dublin City planning red tape and bureaucracy.

Paul explained: “The day care is not yet constructed.

“That was something we planned to expand into, but the VAT situation has dented those plans.

“We’re still looking at it but we’ll see where that goes.”

“For just the grooming shop here it cost just over €250,000 — a huge jump. The remodel for the daycare next door will put that cost up even more.

“But the difference doesn’t add up. Ireland’s just such an expensive place to be.

“That’s all down to Dublin City Council. They took so long to get things done.

“Then when we applied for planning permission for the daycare next door, they made us get another whole sound engineer report done, which took another number of weeks and cost thousands.

“I asked why I was being asked to do it all over again as we have dogs next door, we can just use the same sign sound mitigation measures but they were having none of them. “The business also initially included a dog chauffeuring service, but this ceased due to parking issues in the city.”

WHEN it comes to VIP dog pampering, these celebs show how it’s done:

And the pooch now lives a fine life in her home in Stoneybatter.

Holly said: “He has forgotten his roots in the pound. He is a spoilt diva with three beds.

“He goes to a groomer called Pooches Palace and gets his nails done. I love him so much.”

CLEANING guru Mrs Hinch has a dedicated hair wash station at her new home for her pet dog Henry.

She transformed a “small room used to store paint” into a luxurious space with tiled walls, a shower featuring Henry’s initials on the floor, and shelving to store all of his pampering products.

SOCIALITE Paris created the ultimate home for her beloved pet dogs – a mini replica of her own home, which spans 300 square foot and has two floors.

She said: “It has air condition-ing, heating, designer furniture and a chandelier.”

KEEPING Up with the Kardashians star Kylie Jenner built a huge house for her pet dogs Norman, Bambi and Sophia in the grounds of her estate.

It is believed to have air conditioning to keep the pooches cool in the Californian heat.