Laundro-Mutt is all about animals – Southeast Iowa Union 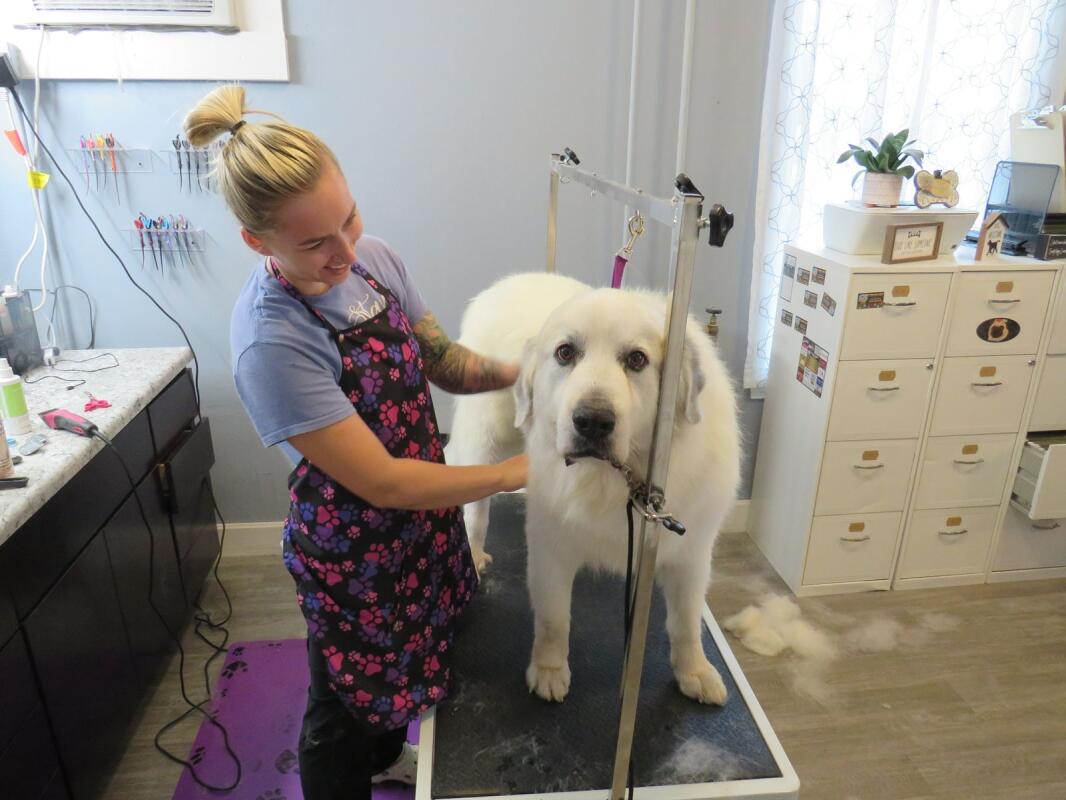 Clyde, an unenthusiastic Great Pyrenees, patiently allows Laundro-Mutt owner Alyssa Whittemore to brush him down. The large, thick-coated dog’s typical time at the groomer’s is 4-5 hours, depending on how cooperative he feels that day. (Kalen McCain/The Union)

Whittemore said it was hard to be in a bad mood at her workplace, always occupied by dogs and cats (Kalen McCain/The Union)

Some pets, like Bonnie pictured here, are more skeptical of grooming services than others. A big part of the job is coaxing these animals into the care they need. (Kalen McCain/The Union)

Dog and cat grooming service Laundro-Mutt opened in Washington in 2019, after Owner Alyssa Whittemore parted ways with an unrelated pet grooming business in Iowa City. Since then, she said her self-started business had paid off.

“I really enjoy being able to kind of work on my own and take pride in everything that I’ve done being my own,” she said. “I’ve worked really hard to make this my own and I’m really proud of that, versus working at a corporation.”

“I really take strongly to having a connection with my clients and the dogs that they have,” she said. “Some of those clients that I had that really good connection with, I told them I was moving to Washington and they followed me here.”

That’s not to say it’s been a smooth ride. Pet grooming skills are very different from business management skills, and Whittemore said running her own place came with a learning curve.

“It was kind of slow at first, but once people got to know who I was, it made it a lot easier,” she said. “I really just took it day by day. It was really overwhelming to think about all the visions that I had … the biggest thing was financially, having to through all the steps of getting a loan and getting that kind of stuff as a startup.”

Whittemore said she had her doubts when the location opened. She chose a location in Washington because she lived in town at the time with her then-boyfriend (now fiance) and because she noticed a lack of grooming services in town.

On top of the usual risk that comes with starting a business, Washington offered a smaller and demographically distinct market from her experiences in Iowa City.

“It was a lot of stress,” she said. “Going from Iowa City where it’s a lot more opportunities for dogs, coming to a smaller town I wasn’t sure how busy I would stay.”

Once a few months passed and word had time to spread, Whittemore knew she made the right call.

“People know it works once they start hearing word-of-mouth,” she said. “They pass it along to their friends. And I also get some from the surrounding areas like Brighton and Keota and Wellman, and even some from Iowa City still.”

The career path is easy to trace. Whittemore said she previously wanted to be a hairdresser or a vet. Animal grooming turned out to present the best of both worlds.

“I kind of went back and forth between working with animals because of how much I love animals, and then the beauty side of things, I was going for a turn toward the cosmetology side of things for a while,” she said. “When I thought about being a dog groomer, it just kind of made sense.”

One upside of the business is that animals are often easier to work with than people. There are, of course, exceptions.

Whittemore said she had a way with animals that were hesitant about their trip to the groomers.

“We try to give them some downtime sometimes, we’ll let them walk around and get used to their environment,” she said. “We’ll sweet talk them, give them treats, and just kind of take it on their time.”

The work is demanding. Behavioral issues aside, Whittemore said a typical dog grooming took anywhere from 90 minutes to 5 hours, and a lot of physical activity depending on the animal’s size, hair and adjustment time.

“We take into consideration what it’s doing to our bodies when we consider the prices we charge,” she said. “Maneuvering dogs to the positions that we need them, there’s a lot of bending and lifting … a lot of brushing, I think my wrists might have carpal tunnel sometime soon.”

Nonetheless, she said it was worth the effort.

“I don’t think you can really come to work and be in a bad mood when you’re working with animals,” she said.