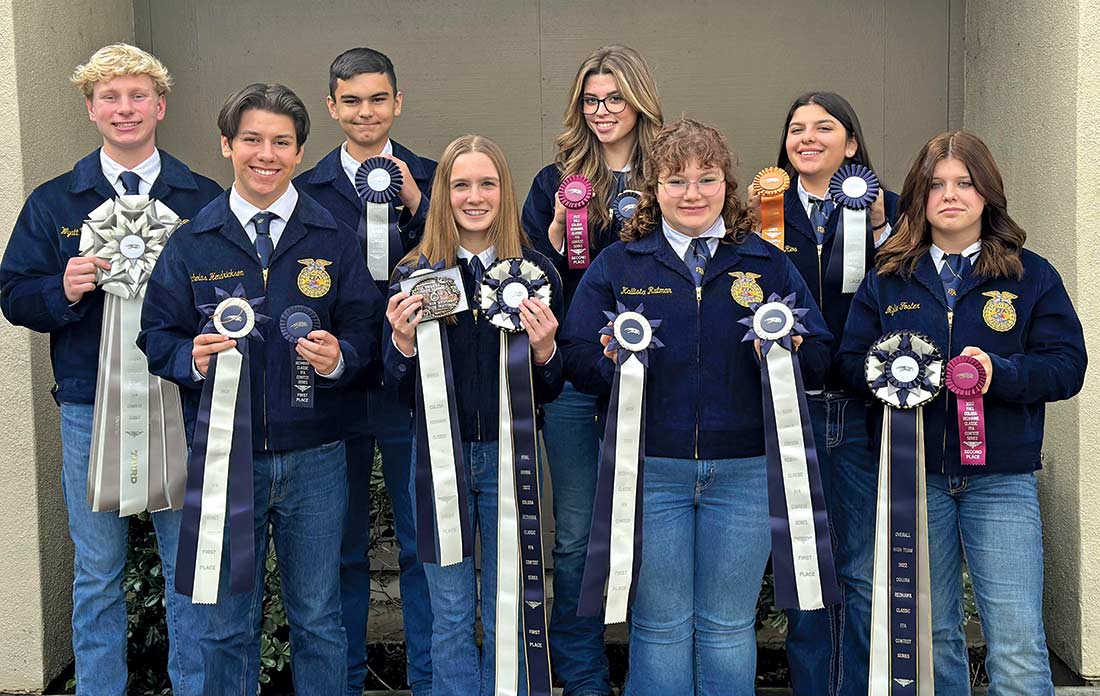 Members in our Gilroy FFA Chapter have been challenged to develop critical thinking skills and effective decision-making skills, foster teamwork and promote communication while recognizing the value of ethical competition plus individual achievement through Career Development Events (CDEs). Since the middle of September our Best Informed Greenhand (BIG) team, Cooperative Marketing Team and Veterinary Science CDE teams have been practicing tirelessly in preparation to compete against other teams around the state of California.

The objective of the Best Informed Greenhand contest is to understand the aims, purposes, history, and structure of the Local, State plus National FFA student organizations and know the opportunities it makes available as referenced in the current National FFA Manual and State Constitution. This contest is for freshmen members only. Members of our fall group include: Isabella Alvarez-Rubio, McKenna Cooper, Tiago Sousa, Wyatt Van Laar, Mylie Foster, Kylie Jimenez, Kallista Rutman, Nicholas Hendrickson and Elizabeth Rios.

The team competed against 23 other schools and 60 some other students.

The Veterinary Science CDE event seeks to effectively prepare the students for the expectations of the animal health care and services (Veterinary Hospitals/Clinics, Grooming Facilities, Pet Stores, Kennels/Boarding Facilities and Feed Stores) workplace. Workers seeking careers in the animal healthcare field must develop a high degree of knowledge, skill plus ability to solve difficult problems. This event blends the testing of skills and knowledge required for careers in the animal science career pathway. Members of the team include: Ari Rutman, Ryan Young, Taylor Yonkers, Catarina Correia and Aleeya Jones.

The Vet Science group has competed in four separate competitions through the Colusa Redhawk Classic that had 12 teams competing with over 93 students. The results are as follows:

The Cooperative Marketing event seeks to effectively prepare the students with the practices and operations of Agricultural Cooperatives. Workers seeking careers within cooperative marketing must not just develop a high degree of knowledge and skill, they must also develop the ability to solve difficult problems. This event blends the testing of manipulative skills plus knowledge required for careers in operations and marketing. Members of the team include: Caitlyn Correia, Sawyer Tankersley, Santiago Trujillo, Olivia Epps and Daniel Garamendi.