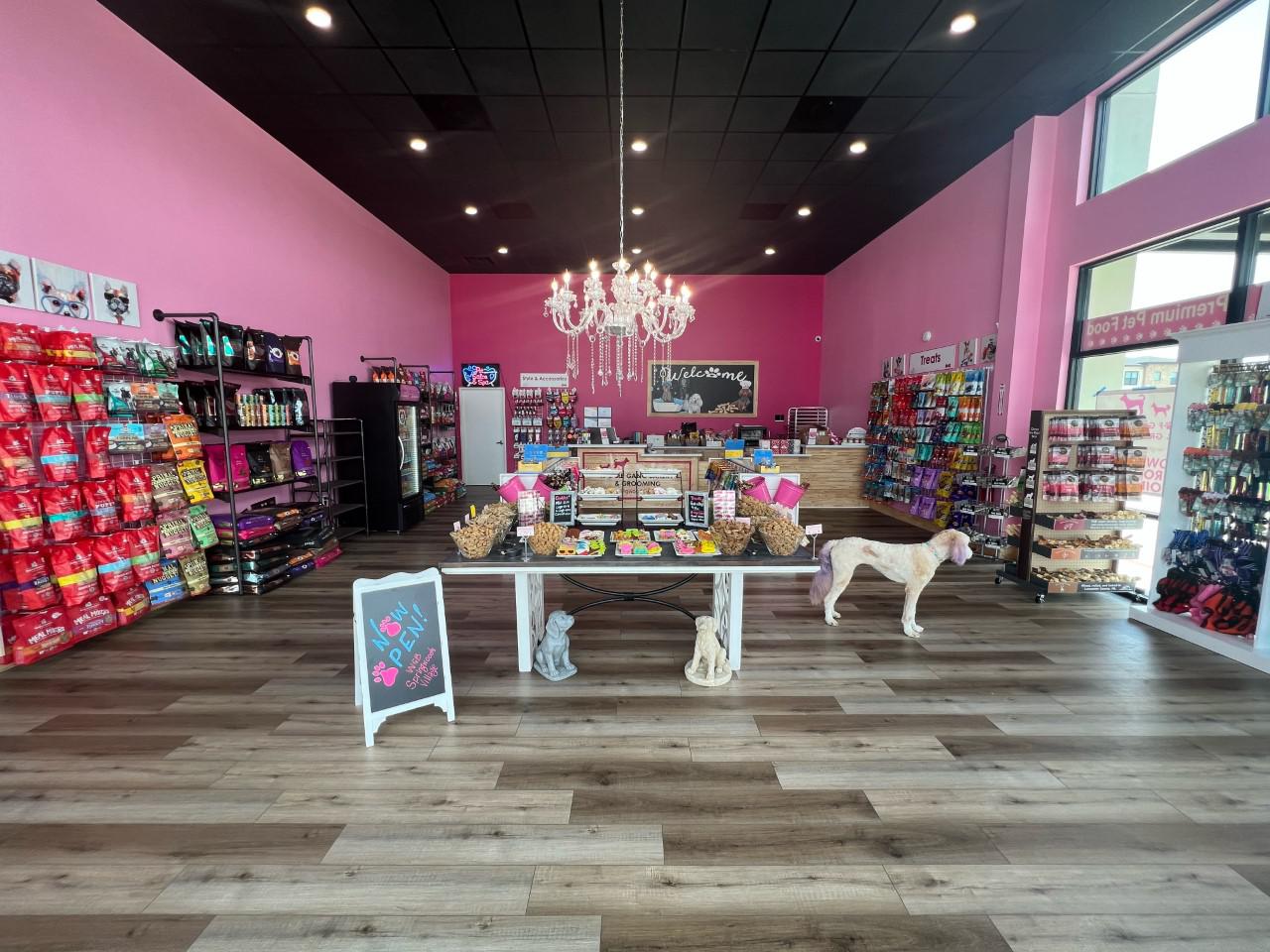 It wasn’t long ago when the Patels were in the hospitality business, building hotels for a living.

When COVID-19 spread, the hospitality industry went downhill, leaving Amith and Divya Patel pondering what to do next.

When looking for something that they thought would bring them joy, they thought of their dogs — two doodles named Charlie and Bruno. Their love of dogs is what drew them to their next enterprise: a pet grooming and bakeshop business.

Woof Gang Bakery & Grooming held its grand opening this past weekend along with an adoption event, May 7, at City Place—formerly Springwoods Village. It’s one of two new Spring area stores from Amith and Divya, who plan on developing more in the future.

On HoustonChronicle.com: BARC duo Shanti and Minestrone were rescued from a Houston hoarder and need new a home

“Springwoods Village (Woof Gang Bakery & Grooming) is now open and we’re excited about what’s in reserve at the end of summer as well,” Amith said.

Woof Gang Bakery is a boutique, groomer, dog spa and bakery. There’s a full array of dog spa and grooming services available from nails and haircuts to baths to facials. In the shopfront, Amith said they offer fresh baked treats, premium dog food and a full bakery for dog cakes to celebrate birthdays or happy gotcha days.

The first store is located at 2015 Spring Stuebner Road and had a soft opening prior to the grand opening. The second store will be located off the Grand Parkway in Woodson’s Reserve and is slated to open toward the end of the summer.

On HoustonChronicle.com: After the arboretum completes its master plan, dogs and their people raise funds to maintain expansion

Amith has management staff that run day-to-day operations but intends to show up to both locations on a daily basis.

“I plan on being a hands-on owner,” Amith said. “I like to meet our customers, I like to hand greet everybody.”

‘The most joy in life’

Their own fur babies inspired the Patels to bring the Woof Gang locations to the area.

Charlie is a five-year old golden doodle. The Patels weren’t very familiar with the breed at first and didn’t know how big he was going to get.

About three years ago, the Patels decided to bring Charlie a companion while they were at work. They brought home a miniature double doodle, Bruno, who is 30 pounds.

Amith thinks everyone should have a dog because they’re simply a “bundle of joy.”

“The best thing about a dog is whether you’re mad, sad, tired, anytime you come to the door, coming home from work, they’re always wagging their tail and happy to see you,” Amith said. “It brings the best out in people, having a dog at home.”

Due to the pandemic, the Patels wanted to get into another business but also wanted to stay somewhat in a hospitality industry.

One day, he and his wife looked at their dogs, and thought, “dogs bring us the most joy in life,” so they started exploring options involving dogs. He said they wanted to bring their dogs to work with them every day.

The Patels had been using Woof Gang for many years for their dogs and considered the franchise. Amith said they did their research and ended up liking the model. They decided to open multiple locations.

“Why can’t we find who the franchisee is, find the areas that aren’t developed yet and develop a couple of them,” Amith said.

The Patels felt two stores was perfect to start off, though the end goal is to develop five to six.

The couple lives in Spring. Amith said they see an area of growth.

City Place is growing immensely. It’s home to major companies such as ExxonMobil and HPE’s new global headquarters, which are drawing tons of transplants to the Spring area.

The Patels are ready to meet their pet needs with the new location, which is among the largest Woof Gang Bakeries in Texas. Coming from a hospitality background, Amith wanted to make sure it had open spaces, big ceilings, massive chandeliers.

‘We’re really looking at the demographics of all of the transplants and inviting them to see what Texas is all about,” Amith said.

The Patels also intend to use their business to help support pets in need. Animals cannot tell their life story or ask for help, Amith said.

“We plan on donating 1 percent of all net profits back to shelters and food drives and things of that nature,” Amith said.

The Patels are excited to start this journey.

“The store turned out amazing,” Amith said. “Everyone that has come into our store so far loved the location, loved how big the store is and what we offer inside.”