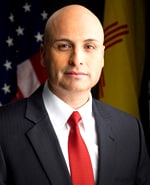 ALAMOGORDO — New Mexico Attorney General Hector Balderas announced Monday that Guadalupe Evelyn Kingston, who held power of attorney for a nursing home resident, was sentenced to five years in the Department of Corrections for the crimes of Exploitation of a Resident’s Property (over $20,000), two counts of Forgery (each over $20,000), Identity Theft, and Falsification of Documents.

As part of her sentence, Ms. Kingston was ordered to pay restitution in the amount of $84,094.44 and is prohibited from working with minors or vulnerable adults upon her release from prison.

“Our most vulnerable need protection, and the defendant brazenly abused that trust by exploiting an innocent victim for her own personal gratification,” Balderas said.

Kingston represented to the Human Services Department that funds belonging to a nursing home resident were being held in a Medicaid trust, when in fact, no trust existed and Kingston was spending the funds on herself for trips, a car payment, spa visits, online dating, pet grooming, and other personal items.

This case was investigated and prosecuted by the Office of the Attorney General’s Medicaid Fraud Control Unit (MFCU). MFCU receives 75 percent of its funding from the U.S. Department of Health and Human Services under a grant award totaling $3,774,509 for Federal fiscal year (FY) 2021-22, of which $2,830,884 is federally funded. The remaining 25 percent of the approved grant, totaling $943,625 for FY 2021-22, is funded by the State of New Mexico.