A happy zone for furry friends – The New Indian Express 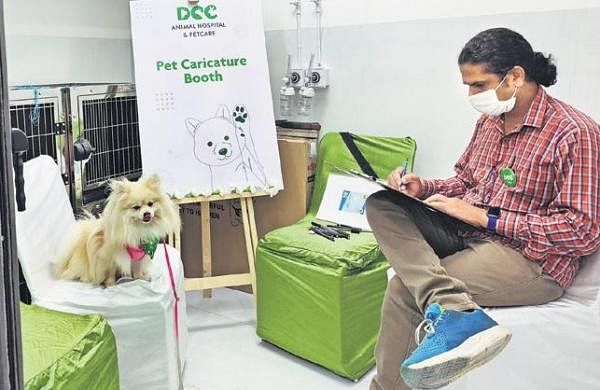 It was a rather exciting Thursday morning for Gurugram-based Ayumi and Dr Anika Goel from Greater Kailash. Accompanied by their furry companions—Ayumi was with her golden Pomeranian named Marshmallow and Goel tenderly held her Yorkie, Cookie—the Delhi-NCR residents along with other pet parents and their canine friends were at the inauguration of the region’s third DCC (Dogs Cats & Companions) Animal Hospital branch (a multi-specialty pet care chain) at Uday Park, South Extension II. A few minutes after arrival, both pooches were seen socialising with other pet lovers at the event. The two dog parents also got caricatures made of their pets. As more people gathered, a fun vibe filled the air.

The inaugural event took place in the presence of Dr Umesh Sharma, President of the Veterinary Council of India (VCI). “We are of the belief that there is god in every creature on this planet. It is the moral duty of human beings, who have been granted the intellect to protect these animals. This has been a part of our philosophy for a long time. I congratulate the doctors and other members of DCC… you are a part of a noble profession, ” he shared in his address to the attendees. Takashi Suzuki, Director General of Japan External Trade Organization (JETRO); Ikko Watanabe, First Secretary of the Embassy associated with Japan in India; Neelam Pratap Rudy, former women’s cricketer; and others were also part of the event.

With two other centres at Gurugram and Greater Kailash, DCC Animal Hospitals provides veterinary healthcare and pet-care services along with day boarding, day-care, and grooming, etc . The chain has also launched a DCC PetConnect application that will help pet owners to track medical records.

Sonam C Chhabra, who shuttles between Gurugram plus Mumbai, was at the event with her pet dog Mowgli—she also hosted the event—concluded, “I am an animal lover and I love places that are pet-friendly. I think animals need outdoor places to enjoy, which is what I like about today’s event… everyone here is really friendly towards pets. ”